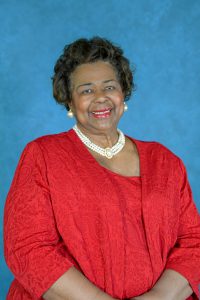 Those who know Bettye Maddox well would agree that she lives by the words, if I can help somebody then my living is not in vain. It???s what she saw as a child demonstrated by her parents and other parts of her “village.” Those who influenced her life, including extended family, neighbors, friends and her church. She models this behavior, both professionally and privately.

Maddox is a substitute teacher for Kansas City, Kansas Public Schools, where she teaches elementary school children in grades kindergarten through 4th grade. She recalls leading a reading exercise in class one day and the students encouraged her to skip over one of their classmates. “They said, he cannot read” to which she responded, “he is going to read today. She told the students no one should laugh and she took the time to help the student sound out each word. He then read the passage from the book. This was a rewarding experience,” she said. “The student accomplished the task of reading aloud through encouragement and I was able to help him reach that goal,” she said.

Her love of teaching comes from her mother who taught four grades in a one room school house in Shreveport, Louisiana. She recalls her mother saying to her, “When you learn something, teach someone else. You will make me proud, if you teach better than me.” Maddox said, “I know she would have been beaming about me helping that student to read.”

Prior to Maddox teaching, she worked for 25 years for the United States Post Office, where she was elected to consecutive terms for local, state and national offices with the American Postal Workers Union (APWU). Among the union positions she held: steward, chief steward, legislative director, and for 22 years the positions of editor, director of human relations, and director of injury compensation. On the state level, she was director of human relations and director of injury compensation for 20 years, and at the APWU National Headquarters she was the Central Region Post Office Women for Equal Rights (POWER) coordinator. She is credited with the getting more than 250 workers’ compensation cases by the Department of Labor for the local and state.

Earlier in her career, she was the 1st African American female to work for the first African American male vice president of the Human Relations Department at Universal Studios in California. She stated ,”One of my jobs was to go on the film set every day to make sure the rights of the actors were not violated.” This allowed her to work with film and television legends, including Lucille Ball, Telly Savalas, Redd Foxx, Charlton Heston, Billie Dee Williams and Isabelle Sanford, just to name a few.

She has received many honors including the Friends of Yates Outstanding Women of Distinction, Who’s Who in American Universities and Colleges, American Postal Workers Union’s Community Service and Human Relations Award, American Postal Press Editor’s Award. She is also an 18-Year Breast Cancer Survivor.

She received her bachelor’s degree in business administration and human relations from Saint Mary???s College in Leavenworth, Kansas and was president of her graduating class on Donnelly campus.

She is the proud mother of a son who is an engineer at Warner Robins Air Force Base located in Georgia and one of the minority owners of MRI, Inc. LLC producers of Eleven86 Artesian Water located in Autaugaville, Alabama. She also has a granddaughter who lives in Baltimore, Maryland.