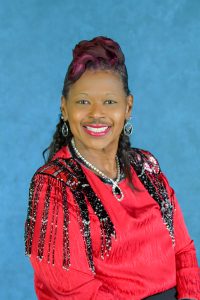 Dr. Kathryn Lee Maddox-Ridley says she has an appetite for the joys of learning and teaching others. “I look at myself as passing on the baton and equipping the next set of educators with what they need to be successful,” she said.

Her background in education has been primarily with the Kansas City Missouri School District, where she worked as a speech therapist, M.A.P. test coordinator and special education consultant.

Her philosophy on why she teaches, she said is summed up best in this anonymous quote, “A hundred years from now, it will not matter the sort of house I lived in, what my bank account was, or the kind of car I drove, but the world may be different because I was important in the life of a child.”

As an educational advisor for Channel 9’s “Jellybean Television Program,” she developed a home/school program called H.E.L.P. (Home Enrichment Language Program) for parents to use at home to develop, reinforce and strengthen a child’s language skills.

She is the co-owner, educational consultant, and motivational speaker of Pathways to Learning, LLC, which assists teachers in becoming better at their craft. “I have such a great passion for education and I wanted to continue to be a part of providing “educational excellency” so I started my business. Teachers need to be encouraged to give their best,” she said.

Like her sister, Bettye Maddox, her passion for education started with their mom, who graduated from Grambling State University and taught in a one-room school house in Shreveport, Louisiana. “My mom said to us your life is like a storybook, make it a best seller,” she said.

Maddox-Ridley’s story has been one focused on making a positive impact on the lives of others. She initiates and donates backpacks to the homeless with personal care items, purchases school supplies and uniforms, and participates annually in Random Acts of Kindness, providing winter weather clothing to those in need.

She organized the “Kids Against Crime Rally” to curb violence, which led to her receiving a proclamation, key and special day recognition from the cities of Raytown, Lee Summit, Kansas City, Kansas City, Kansas, and U.S. Representative Emanuel Cleaver II.

She is a member of the National Black Association for Speech, Language and Hearing, the Council of Exceptional Children, International Reading Association, Who???s Who in Education, American Federation of Teachers and Striving Toward the Excellency in the Performance of Student Progress, Friendship Church (KCMO) and Bethel Church (Honorary-KCK)

Dr. Maddox-Ridley has received numerous honors, including the Friends of Yates Woman of Courage Award, the Crystal Apple Award from Fox 4, as well as, Rosa Parks’ Hall of Fame, Mothers of Incarcerated Sons & Daughters, Lawrence A. Jones & Sons Funeral Chapel, the Kansas City Star newspaper and a number of awards from the Kansas City Missouri School District.

She is married to Carlton Ridley, Jr., and has an awesome daughter, Carleeta Ridley-Mathews. She has a great support team of four sisters, one brother, extended family and friends.