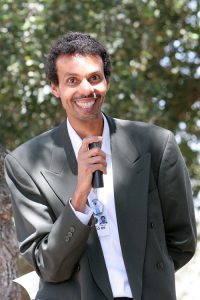 Sumner High School, 1972 (Valedictorian)
Other Kansas City, Kansas Public Schools attended: Douglass Elementary and Northeast Junior High
The same teaching excellence and quality education James Lindesay received as a student at Sumner High School is the same attention to detail and care he gives to the young adults who sit in his classrooms as a professor of physics at Howard University in Washington, D.C. “They nurtured us and helped us to be successful at Sumner High School,” he said. “Teachers would stay after hours and come on the weekends to help us get ahead.”

In particular, he recalls the extra help he received in science and math from Mr. Leroy Pitts, Mr. John Rice, Mr. Felton Denham, Mr. Henderson, Mr. Williams and Mr. Webb. In fact, he credits this team of teachers with helping his siblings to becomes successful in their professions.”They (Sumner’s teachers) made me feel I could do anything if I put my mind to it,” he said. He in turn has done the same by mentoring all who seek out his help and guidance, from undergraduate, to graduate and postdoctoral associates.

He realizes the encouragement was the boost he needed to become a noted professor of physics at one of the foremost historically black universities in the country. He has published more than 100 scientific articles, including three books on high energy physics, quantum gravity, and black hole physics. His books are used to teach students at Stanford, Yale and Harvard.

Prior to teaching at Howard University, he served for three years in the Peace Corps in Tanzania, where he taught nuclear physics, quantum physics, statistical physics, and electromagnetism to students at the University of Dar Es Salaam. As a result of his work in the east African country, he was nominated for International Volunteer of the Year.

Lindesay received the Gore’s Award for Excellence in Teaching from Stanford University and has been selected to Who’s Who in America, Who’s Who in Collegiate Faculty, Who’s Who Among America’s Teachers, Who’s Who in Science in Higher Education, and the New York Academy of Sciences.

His first college studies came as a part of a dual enrollment program between Sumner High School and Kansas City Kansas Community College. He received a bachelor’s degree in physics from MIT or Massachusetts Institute of Technology in Cambridge, Mass., and both a master’s and doctorate in physics from Stanford University. He participated in a post-doctoral fellowship at the University of California at Berkeley, and another fellowship at the Stanford Linear Accelerator Center.

He was born in Kansas City, Kansas, and now resides in Washington, D.C.

KCKPS Call Center: 913-627-2455
Device Deployment for Students - Schedule
Curbside Meal Information
Frequently Asked Questions for All Covid-19 Related Matters
COVID-19: When to Wear a Mask
State Assessments Have Been Suspended
Letters from USD 500
The Latest on the Virus
What If I Think I've Been Exposed?
Sumner Academy Open Enrollment Changes