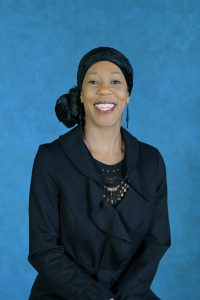 Jeainnie Brown does not think she would have been thinking about college if it had not been for the support of her guidance counselor at Wyandotte High School, Mrs. Wills. “She saw something in me and put all of her energy into making sure I went to college. She researched scholarships and helped me fill out applications, which allowed me to graduate debt-free,” she said.

Brown, who became a first-generation college student, said Mrs. Wills “brought to life the possibilities for my future as a certified public accountant.”

Her counselor also recommended her for the INROADS program, a career development program providing nearly 2,000 internships in corporate America annually to college students. Through this program, she was able to obtain an internship in accounting at Sprint. Her on-the-job experience at Sprint would later lead to a full-time job at the company after she graduated from college.

After more than 12 years at the telecommunications company, she joined Hallmark Cards, Inc., where she is currently responsible for financial analysis and managing retail debt collections.

Her father might say that he knew early-on she would do something with numbers. You see as a child she was fascinated by the Count on Sesame Street. But there were other ways in which she connected with numbers from childhood. “I liked to watch my dad pay the bills weekly, which also exposed me to the value of a strong work ethic and the importance of responsibility,” she said.

The help she received in high school along with the influence of her dad inspired her to share her experiences with others. “I feel an obligation to give back because of the valuable input I have gained from others over the years,” she said. She is involved in several initiatives that puts her in position to speak to high school and college students. An example of this work is her involvement with Prep-KC, where she has participated in the Career Jumping program to share insights about working in the corporate world and reaching career goals. Other organizations where she volunteers her time are Christmas in October; Harvesters Back Snack program; Salvation Army Gift Wrap; Junior Achievement; and Kansas City Friends of Alvin Ailey.

Her bachelor’s degree is in accounting from the University of Kansas in 1993. She is a certified public accountant and certified supply chain professional.

She lives in Kansas City, Mo., and is the proud parent of a 16-year-old daughter, Jeanelle Brown, who excels in sports and academics.