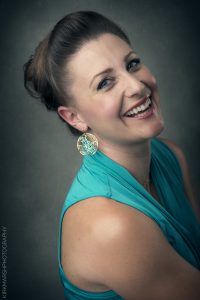 “You don’t have to fit a prescribed mold to find greatness. You have something unique and beautiful inside you, and that is your most powerful asset. That is where you can change the world.” This is Linsey Lindberg’s advice to students. When she told her parents she was leaving her high-rise New York City career in order to work with the circus they were not thrilled about the idea, but it was this determination to discover her own unique greatness that gave her the strength to change the course of her life.

“Now everyone thinks I’m a genius because I made it work; I have been a self-supporting artist doing what I love doing since I graduated from college,” said Lindberg.

She astounds audiences across the globe with feats of strength while using her Kansas charm to engage, motivate and empower members of the audience. Lindberg is a bona fide strong woman, performing as Mama Lou: American Strong Woman. Some of her feats include tearing a phonebook in half, rolling frying pans and crushing apples with her biceps. She inspires audiences to believe in themselves and that anything is possible. She has performed around the world for 15 years in places, such as Fiji, Tasmania, Iceland, Ireland, Singapore and New Zealand.

She also employs hundreds of performers through her award-winning business Artisan Oddities and Entertainment located in San Antonio, Texas. The five-year-old business has received several awards and recognitions including the 2015 Texas Star Awards for best entertainment in Texas. She has produced shows for grand openings and major groups, such as SpaceX and the NCAA.

Lindberg has also made appearances on a number of national television shows, including To Tell the Truth, The Late Late Show with James Cordon and The Today Show.

She has a bachelor’s degree in religious studies from Hunter College in New York.