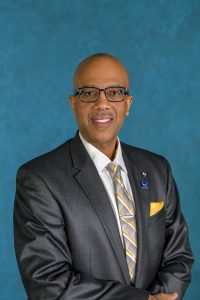 Lyle Gibson’s love of history dates back to his elementary school years, where his sixth grade teacher explained to his class where they could understand the impact of the slave trade. “That moment provided the cornerstone of where I am today and influences how I teach students,”  he said.

Gibson has been living out his life’s dream of teaching history for more than 20 years. Currently, he is in his second year as the Division Chair of Social Sciences at Metropolitan Community College on the Penn Valley Campus in Kansas City, Mo. He has been part of Metropolitan Community College for more than 14 years, where he is now responsible for scheduling disciplines, hiring faculty, collecting data, assessments and working on the 2020 accreditation process for the educational institution.

Prior to this, he was an adjunct professor at Kansas City, Kansas Community College, where he taught history after being honorably discharged from the U.S. Air Force branch of the military.

Gibson is described by a friend as “embodying the fulfillment of learning and discovery by utilizing innovative teaching methods to inspire students. He incorporates films, discussion and lecture, and encourages students to become active in their student organizations. For the last several years, he has incorporated a Civil Rights Learning Community where students get on a bus and travel around the country to see some of the major milestones and events of the Civil Rights era.”

“The Civil Rights Learning Community Class is a pilgrimage that happens every April. The participants in this excursion participate in small group discussions utilizing critical thinking skills and reflective writing about they have seen and experienced along the journey,” he said.

In 2018, the class traveled through Cincinnati visiting the house of abolitionist Harriet Beecher Stowe and author of Uncle Tom’s Cabin, which depicts the harsh conditions for enslaved African Americans; the Underground Railroad and Monticello, the plantation of the third president of the United States, Thomas Jefferson.

In 2019, he will take a group of students through Alabama, where they will visit Selma, and travel across the Edmund Pettus Bridge, the site that became known as Bloody Sunday because civil rights marchers were attacked as they attempted to peacefully march across the bridge from Selma to Montgomery, Alabama.

All of these civil rights journeys conclude in Memphis, Tennessee, at the National Civil Rights Museum (Loraine Motel), the site of the assassination of Dr. Martin Luther King, Jr. “As you can imagine those who take the class are forever changed after the experience,” he said. Because of that rich, history experience, there are usually several people interested in the class, which is limited to only 22 students.

His passion for history and research has led him to discoveries about his family’s background. In the book he wrote, titled Black Tie, White Tie, he shares his family’s roots from the colonial period to the present time. Through a crowd funding campaign, he later turned the book into a documentary. And there are several other documentaries in the works by him ranging in topics about race in America, immigration and cultures.

He is the president and executive director of the Elijah Adkins Reed Historical Preservation Society; member of the Midwest Afro-American Genealogy Interest Coalition; Black Achievers, National Society of the Sons of the American Revolution and a Freedom’s Frontier National Heritage Area contributor.

Gibson, who was born in Kansas City, Kansas lives in Raymore, MO. He is the father of 2 children.