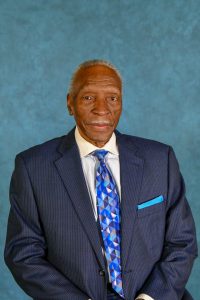 Ask Robert L. Milan, Sr., what the pathway to success is and he will say these three words to you: home, school and church. “These are three essential elements to moving forward and developing a good life.” It’s the way he has lived his life, which was instilled in him by his parents.

“You have to be disciplined, get an education and remember to thank God for what you have been given,” he said.

Milan worked for 33 years for the U.S. Department of Labor, where he retired as a federal representative in the Employment and Training Administration in 1986. While working at the Department of Labor, he wrote and produced the initial Compliance Manual for guidelines to detect areas of discrimination when individuals filed claims for unemployment insurance. The program was implemented nationwide and was used in all agencies.

Those who lived in the northeast areas, may also recall he owned Milan’s Roller Arena and Bowling establishment near 5th Street and Richmond Avenue and was trained as the first black certified bowling instructor in the Kansas City area.

He has served as vice president of the board of the Board of Public Utilities for 27 consecutive years. He has also served as president of BPU board for six terms. The Robert L. Milan, Sr. Pump Station, located at 3760 North 63rdStreet, was named in his honor on June 12, 2007 in appreciation of his long tenure and tireless dedication to the BPU and for his service to the Kansas City, Kansas community as the longest serving elected official in Wyandotte County.

Milan has spent his entire life giving back to the community. He is the president of the Northeast Economic Development Corporation, a nonprofit organization dedicated to the housing needs of citizens. “We revitalize neighborhoods by upgrading homes to bring back the spirit of the community,” said Milan.

He has served as a member of the Northeast Optimist Club since 1973, where he has held positions as president, vice president, and lieutenant governor. He was state president of the American Association of Retired Persons (AARP) from 2000 to 2002, and secretary of the Wyandotte County Port Authority from 1984 to 1986. He was instrumental in securing the Fairfax General Motors Plant for our community, which was recognized by former Mayor Joe Reardon, Sr. He was past president of local 1748 of the American Federation of Government Employees (AFGE).

He has also been responsible for several sporting events in the community by sponsoring softball leagues for men and women and the establishment of the first soccer program for the youth located in the northeast area of the community.

Milan is a lifelong resident of Kansas City, Kansas.

He has one son, Reverend Robert L. Milan, Jr., the pastor of the Greater Faith Missionary Baptist Church in Kansas City, Kansas.