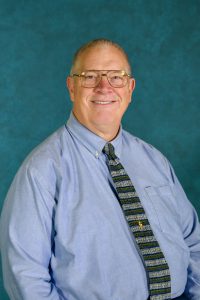 The best advice given to Timothy Johnson is “Never Quit.” That advice was given to him by his high school football coach Clyde Strimple and it is advice that he continues to give to others.

That never quit attitude has served him well. He began his professional career in law enforcement, where he served for 31 years. He rose to the rank of undersheriff in Wyandotte County, and would later serve as a chief of police in Lindsborg, Kansas.

After retiring from public safety, he entered the world of education through the Kansas City, Kansas Public Schools’ Teaching Fellows Program. This unique program allows individuals with a bachelor’s degree in science, technology, business, engineering, math or English language arts to teach full-time while earning a teaching certification or master’s degree in education.

“As a participant in the program, I had an opportunity to teach classes in the summer, which allowed me to realize I wanted to enter the field of teaching for a second career,” said Johnson. You might also say he was following in the footsteps of family when he decided to become an educator. His father taught at Wyandotte High School from the early 1960s to the mid-1990s. Like those before him, he chose to teach in Kansas City, Kansas Public Schools because he wanted to give back to the school system that had given him so much as a student.

Through the Teaching Fellows Program, he earned a master’s degree in education while teaching English at Wyandotte High School. For the last eight years, he has been teaching social studies and history at Basehor-Linwood High School, where he is a successful athletic coach in football and power lifting. His men’s and women’s high school power lifting teams have won a combined total of 18 Kansas State Championships during the last 11 years.

Throughout his life he motivates family, students, friends through the words he lives by, “Never Quit.” About a year ago, he started sending a notecard to friends telling them that he was thinking about them. “You cannot imagine how many people you can touch just by sending words of encouragement,” he said.

Johnson was born in Chicago, Illinois, and lived in Kansas City, Kansas for most of his life before moving to Bonner Springs, Kansas.

He is married to Linda and they are the proud parents of five children and eight grandchildren.